The term ramp is a defined area of the airfield used for aircraft loading and unloading of passengers, cargo or freight, refuelling, servicing, line maintenance and parking.

An airport ramp is a community of relationships, and its success relies on how well these relationships are working.
In April 2022, IATA highlighted the improvement of collaboration between stakeholders as one of three priorities for the ground handling industry, the others being the harmonisation of global standards to improve ramp safety and developing talent.
The aviation industry has been slow to acknowledge the risks associated with ground operations. While most occurrences on airport aprons and taxiways do not have consequences in terms of loss of life, they are often associated with aircraft damage, delays to passengers and avoidable financial costs to industry.

Ramp accidents are considered one of the major problems in the industry and it has been estimated that more than $5 billion a year worldwide is lost by ramp damage, typically caused by collisions between ground service vehicles and parked aircraft.

Ramp safety is a major safety concern in the aviation industry. The airport’s ramp area involves a multitude of activity and movement from various aircraft, vehicles, equipment, and people. In addition, it accommodates personnel and contractors, such as, airport operations and maintenance staff, airport police, fire brigade, airport and airline engineers, planners, and other regulatory and security personnel — all performing different activities and tasks every day.
It is important to spread awareness about ramp safety by identifying the ramp hazards at an airport and the safety precautions needed to mitigate such hazards.
Some of these hazards include adverse weather, staff fitness, faded line markings, short-circuiting of equipment and staff fatigue.
Adverse Weather
Adverse weather conditions also necessitate additional safety precautions to be taken by ground handling agents on the ramp. Every operation has sensitivities to severe weather and such precautions must be made part of training of ramp workers and ramp crews. 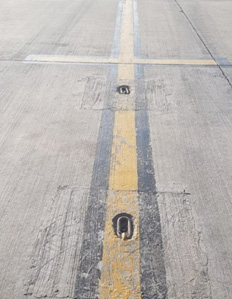 Aircraft tie down procedures are undertaken in case of severe windstorms especially for smaller aircrafts in which they are tied down to on-ground hooks. That is so because an aircraft has an aerodynamically optimised body, and it is very responsive to air passing over it at high speed.  Hooks are embedded in ground on a ramp for securing aircraft during windstorms.
Some aircraft ground operations are suspended under severe weather conditions. For example, aircraft refuelling is suspended if there is risk of severe electrical storms.
In the same way, jet bridges also have a maximum wind rating over which they must not be operated. Under severe wind conditions, jet bridges must be retracted with chocks applied on their wheels to prevent movement due to wind forces.
Staff fitness and injury
An element that is sometimes overlooked when ramp safety is discussed is the importance of ramp staff fitness. Ramp operations require physical fitness of ramp workers.
Baggage loaders must manually unload the bags from the baggage cart on to the conveyor belt.  Bags can be of different sizes and weights and there is no automation in this task.  Similarly, the other ramp worker who receives the bags inside the cargo compartment must sort the baggage properly inside the aircraft. On arrivals, the same procedure is reversed.
Ramp workers who are suffering from any injury cannot be relied upon to carry out such tasks as there would be risk of them causing some accident or injuring their own selves during work.
Common Safety Challenges Involving Ground Operations
Ramp safety rules
Adverse weather conditions also necessitate additional safety precautions to be taken by ground handling agents on the ramp.  Every operation has sensitivities to severe weather and such precautions must be made part of training of ramp workers and ramp crews.
The following are some of the rules that should be implemented and monitored to ensure a safe, compliant, and harmonious ramp:

The content of this blog was made available as a part of the Australian Airport Association Airport Safety Week, 2022.