What Benefit Does The Debris Retention Blade Provide?

The Debris retention Blade is made up of Aerosweep's exclusive Triple Elevator Steps and Debris Retention Barrier. When combined, they create a FOD sweeping capability that is unrivalled. Let's take a close look....

When we first developed our FOD*BOSS Ultimate in 1994, it helped change aviation tarmac cleaning forever and has been protecting every major Air Force, Airport and Airline ever since.  An integral part of the FOD*BOSS and its success as the world’s safest and most-effective airfield sweeper are four exclusive critical safety design features.

We think they’re kind of special and we’d like to tell you why.

What are Debris Retention Barrier and Triple Elevator Steps, and what do they have to do with an Airfield FOD sweeping system?  Later in this eBook, we go into detail on how they perform a critical function in your sweeper’s ability to pick up and retain FOD.

While individually, these features provide outstanding benefits, it is their cumulative effect that offers the best outcome for your FOD sweeping operations.

This patented and exclusive critical safety design feature is only available on a FOD*BOSS.  The importance of the steps is realised when considering

the stop/start motion that sometimes happens during airfield tarmac sweeping, especially when operating aircraft are moving around.  Now some may ask why this is important or even brush it off as a “gimmick”.  However, consider that when the sweeper is travelling at a lower speed (when navigating around parked aircraft or on a busy apron for example), the forward momentum at times may not be sufficient to scoop up the FOD into the capture zone.

The Triple Elevator Steps act like little areas that critically hold the FOD which hasn’t yet made it up the scoop’s face and prevent it from sliding back down during a deceleration phase, and onto the tarmac.  If it makes it down back onto the tarmac it can potentially escape as the sweeper moves off again,  over an expansion gap or similar break in the tarmac surface, or over a grooved runway.

Our Debris Retention Blade is also a patented and exclusive critical safety design feature that is only available on a FOD*BOSS.  The importance of the steps is also related to the stop/start motion that regularly occurs during

airfield tarmac sweeping.  Again, this is very common when operating aircraft are moving around or you are sweeping in a busy and crowded apron area where baggage handlers and aircraft replenishment services are in operation.  We can assure you that what we are about to describe is no “gimmick”, and definitely shouldn’t be brushed off.

The forward momentum that pushes the captured FOD towards the intake scoop ramp is prevented from falling into this zone by virtue of this raised blade (see picture).

The Debris Retention Blade performs a critical function in preventing the forward spill of FOD and it becoming a risk if dumped back onto the tarmac if the sweeper moves over an expansion gap or similar break in the tarmac surface, or over a grooved runway.

The Impact of Poor Design

Below is a picture of what we would describe as a poorly designed debris intake scoop, which you can typically find on a cheap imitation copy.  It has a smooth intake ramp and any debris still on this ramp will simply slide down and remain in an area where it can escape if an expansion joint or groove is passed over.

Aerosweep firmly believes in the importance of collecting 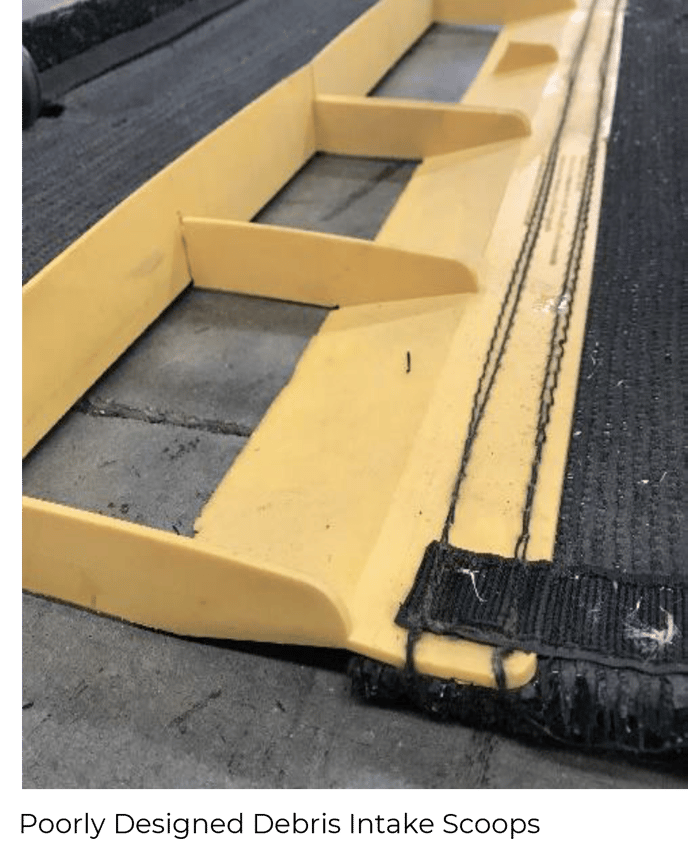 FOD with an unrivalled pick-up rate, and ensuring this throughout the entire forward operating speed capabilities of our airfield sweeper (5 km/h – 65 km/h or 3 mph -  40 mph).  After all, what’s the point in collecting the FOD but then allowing it to get dumped back on the tarmac just because you had to slow down or stop to let aircraft pass, or you drove over one of the many expansion joints in your tarmac?

This is why the Triple Elevator Steps are built into every FOD*BOSS Ultimate.  They allow FOD to be captured earlier in the sweeping process and at all operating speeds.  Not only do they help achieve the very outcome you are looking for (and also help produce the cleanest airfield you may have ever had), but allow you and your team to sweep with confidence knowing whatever it captures, it will retain.

The impact of a poorly designed imitation debris intake scoop can only become amplified when you consider a Duplex or even a Triplex configuration.

Importantly, with a smooth-faced intake ramp or one which has been poorly designed, you may be unaware you are leaving debris behind every time you slow down, stop or travel over a grooved surface.

As mentioned earlier, our Triple Elevator Steps are built into every FOD*BOSS Ultimate, thus ensuring your successful FOD sweeping operations.

This exclusive technology is only available in a FOD*BOSS and is what helps to make a FOD*BOSS so special.  The Triple Elevator Steps is just one of four exclusive critical safety design features included in every FOD*BOSS Ultimate.

You can review the others here.

Referring back to our Duplex and Triplex configurations, the main benefit of using either of these two configurations is that you can amplify your sweeping successes and sweep a much larger area in a shorter amount of time.  For example, the Single FOD*BOSS can sweep an area of 253,760 m2 in an hour, while our Duplex FOD*BOSS can sweep an area of 507,520 m2 and our Triplex FOD*BOSS sweeps 759,200 m2.

Use our sweep time calculator to compare the 3 configurations of the FOD*BOSS using your own runways, taxiways, and apron areas.

Why Every Airfield Needs A FOD*BOSS

Does Every FOD Management Plan Need a FOD*BOSS?

Aerosweep has been providing speed sweeping systems to every major Air Force, Airline, and Airport since 1994.  The FOD*BOSS is capable of cleaning FOD from your entire airfield, including the runways, taxiways, and apron areas.  However, if you currently use a street sweeper, this doesn’t mean you should not consider using a FOD*BOSS.  Many airports around the world combine the benefits of the two technologies, utilising the FOD*BOSS’s ability to quickly and effectively move around parked aircraft and working personnel.

With its unrivalled FOD pick-up rate, using the FOD*BOSS in areas where FOD is more likely to occur through normal day-to-day aircraft supply and loading is a simple and more flexible approach.

The FOD*BOSS can also be used on the taxiways as the sweeping speed possible and rapid deployment capability makes it perfect for this area of an airfield.

Use our sweep time calculator to compare the sweep time benefits of using a FOD*BOSS compared to a street sweeper truck in certain areas, using your own runways, taxiways, and apron area dimensions.

If the FOD*BOSS is not available as part of your airfield’s FOD sweeping armamentarium and would like to discuss with us how we can get one to you, please click on the button below and we can arrange for someone to discuss with you how we can make this happen.

Remember, exclusive design is what makes the FOD*BOSS special, and who wants average if you can have special?

Thank you for your interest in our FOD*BOSS® Airfield Sweeping System and our four patented critical safety design features.

Our FOD*BOSS friction sweeper changed aviation tarmac cleaning forever in 1994 and has been protecting every major Air Force, Airport and Airline ever since.

The FOD*BOSS Ultimate’s many benefits make it the safest, most effective airfield sweeper, guaranteed.

The FOD*BOSS is fully equipped with our exclusive and unique critical safety features that are the secret behind its unbeatable performance and essential to your successful FOD removal operations.

These are unavailable with any other sweeper.

Don’t take our word for it, see what our clients are saying on our website confirming our system is truly exceptional.

Aerosweep believes it is only by ensuring your friction sweeper contains the technology covered in this answer can you rest assured your sweeping operations are using the safest and most effective airfield sweeper, guaranteed!  Now that’s kind of special, don’t you think?